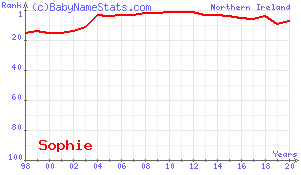 According to the annual reports published by the Northern Ireland Statistics and Research Agency, Jack and Sophie were the most popular babies' names registered in 2010. There were 25,770 births registered: 13,148 boys and 12,622 girls.