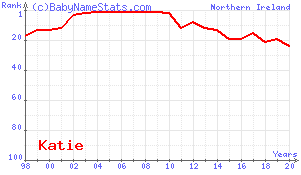 According to the annual reports published by the Northern Ireland Statistics and Research Agency, Jack and Katie were the most popular babies' names registered in 2008. There were 26,252 births registered: 13,535 boys and 12,717 girls.

Jack has been the most popular boys name for the last six years. Matthew has returned to the second place, after being forced to 3rd place last year. Daniel has climbed from the 4th most popular name in 2007 to the third place. Lewis is the only new boys' name to enter the top 20, moving up one place from rank 21 in 2007.


For girls, Katie entered the top 10 most popular names in 2002, becoming the most popular name in 2004, where it has remained since then. Sophie has moved to second place, dropping Grace to the 3rd.