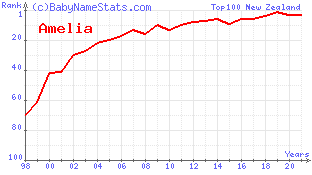 In 2019 Oliver remained New Zealand's most popular baby name for boys and Amelia had overtaken Charlotte as the most popular name given to girls.

This is the seventh year Oliver has made the top of the list for boy's names.

While Amelia has been in the top 10 since 2011, Charlotte and Olivia have swapped first and second place many times over the recent years.