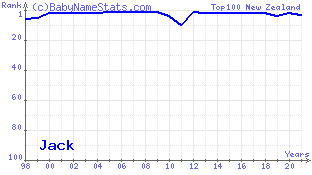 According to the Office of Births, Deaths and Marriages of New Zealand, Jack and Olivia were the top baby names in 2012.

Olivia claimed the top spot for most popular girl's name for the first time after having been a close 2nd in recent years. Jack, which was the most popular boy's name from 2005 to 2009, returned to the top place after placing 10th in 2011.