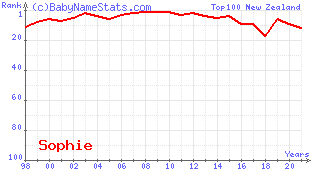 According to the Office of Births, Deaths and Marriages of New Zealand, Jack and Sophie were the top baby names for 2009, unchanged from 2008. Jack has held the title of most popular boys' name since 2005. Sophie has claimed the first spot for the second year.

The boys' top 10 is almost unchanged compared to last year. Lucas and Thomas are the two new names in the boys' top 10 (with the same birth numbers) sharing the 10th spot. The only boy name dropping out from the top 10 list this year is Riley.

Two new names enter the top 10 lists for girls. Ruby is the most popular new entry, coming in at number 2 on the girls' list, rising 11 places. The other new girl name is Amelia entering at number 10. Girl names dropping out from the top 10 are Jessica and Grace.

Traditional names still dominate the top names lists for both boys and girls (e.g., Jack, Oliver and James on the boys' list and Sophie, Ruby and Olivia for girls). No Maori boys' names are present in the top 100 this year, but there are two Maori girls' names: Anahera and Manaia.