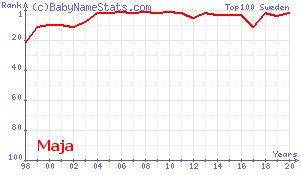 The table shows the 100 most common names given to Swedish babies in 2010. This year, Oscar, William, Lucas for boys and Maja, Alice, Julia for girls were the most popular choices for parents in Sweden.

The number enclosed in parentheses tells us how many babies with that name were born this year. The second number shows if the baby name has become more or less popular in 2010 compared to 2009 ('new' indicates the baby name was not listed in the previous year's top 100).

Note: For names with alternative spellings (Josefin-Josefine, Jakob-Jacob, Linnea-Linnéa, ...), the most common form is given for each name, but the numbers include all variants.