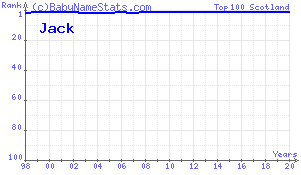 After dropping to second place in 2007, Jack has returned to the top spot, replacing Lewis as the most popular boys' name for new babies in Scotland. Lewis falls to second place and Daniel climbs 4 places to the 3rd.

By the end of November 2008, around 28,100 boys had been registered, with over 2,900 different first names being used. The top 50 names accounted for 47% of the total registrations.

For the fourth year, Sophie is the most popular girls' name for new babies. Emily climbs to the 2nd place whilst Olivia climbs 7 places to the 3rd.