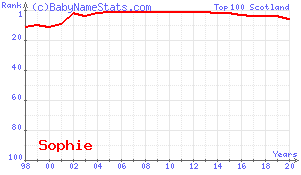 In Scotland Lewis is the most popular boys' name for the third year. Jack stays in second place whilst Callum climbs seven places to third.

Sophie has become the most popular girls' name, while Emma falls to second place, Ellie and Amy remain in third and fourth place.