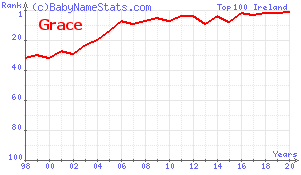 According to the annual reports published by the Central Statistics Office of Ireland, Jack and Grace were the most popular babies' names registered in 2020.

This is the first time that Grace has taken the 1st spot, climbing from 2nd place in 2018 and 2019. Emily had been the most popular name for baby girls since 2011 prior to this year.

These results are based on the analysis of first names recorded on birth returns for registration and vital statistics, begun by the Central Statistics Office of Ireland in 1998.

Since 2018, the Irish CSO publication includes the síneadh fada and other diacritics. This has an impact in the order of the popularity of some forenames. For example Sean (without the síneadh fada) has always been in the top 5 most popular names for boys. Now both spellings are treated as two separate names and thus it falls out of the top 5.