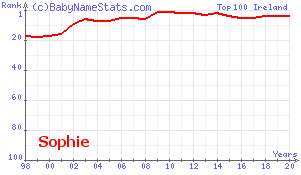 According to the annual reports published by the Central Statistics Office of Ireland, Jack and Sophie were the most popular babies' names registered in 2009. Jack retains the top position it held in 2007 and 2008. This is the first time Sophie has taken the number one spot, climbing up five places from 6th in 2008.

There were three first time entries to the top 100 for boys since 1998: Bobby, Shay and Szymon. The highest new entry at number 85 was Bobby, which rose 24 places from the 109th in 2008. The names rising most in popularity in the year were Szymon (up 30 places) and Lucas (up 25 places).

There were six first time entries to the top 100 for girls since 1998: Layla, Oliwia, Hollie, Madison, Daisy and Emilia. The highest new entry was Layla, climbing 32 places. The baby girl name with the highest gain was Daisy, up 61 places.

Jack, the most popular boys' name, was also most popular within six of the eight Regional Authority areas (Border, Midland, Mid-East, Mid-west, South-East, and South-West). Daniel was the most popular name in the Dublin region while Sean took the number one place in the Western Region.

Notes: These results are based on the analysis of the first names recorded on birth returns for registration and vital statistics, begun by the Central Statistics Office of Ireland in 1998. All birth notifications in 2009 included baby's first name when the statistical return was sent to the CSO. Only the first name was used for this analysis. Names containing accents have been recorded without those accents and different spellings of a name have been treated as separate names.