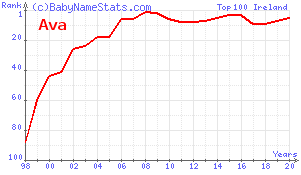 According to the annual reports published by the Central Statistics Office of Ireland, Jack and Ava were the most popular babies' names registered in 2008. Jack retains the top position it held in 2007. This is the first time Ava has taken the number one spot, climbing from 6th in 2007.

While Emma and Sarah have been in the top 5 since 1998, Katie has only came to the top since 2003. Emily and Ava are in the top five for the first time.

In general, the statistics show that girls are given a wider variety of names in Ireland than boys are, with 43.1% of girls given a name not in the top 100, compared with 34.9% of boys.

Note: These results are based on the analysis of the first names recorded on birth returns for registration and vital statistics, begun by the Central Statistics Office of Ireland in 1998. All birth notifications in 2008 included baby's first name when the statistical return was sent to the CSO.