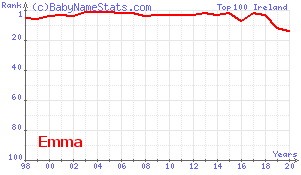 In Ireland, Sean and Emma were the most popular baby names registered in 2004, the second year in a row. There were 928 boys named Sean, 93 more than the second most popular name, Jack.

There were 787 girls named Emma, 213 more than the second most popular name, Katie.

Exactly the same boys' names have been in the top 5 since 1999, with only their order changing from year to year.

There has been more change in girls' names. Amy replaced Ciara in the top 5, and only Aoife and Sarah have retained their top 5 positions every year since 1999.

There were 7 first time entries to the top 100 for boys: Charles, Christian, Hugh, Noah, Odhran, Rian and Tomas. Also, Lorcan and Owen returned to the top 100 after a year's absence. The names rising the most places were Odhran (up 56 places to 100) and Noah (up 53 places to 79).

There were 4 first time entries to the top 100 for girls: Alex, Amelia, Kayla and Orlaith. Also, Ailbhe, Isabel, and Sara returned to the top 100 after a year's absence. The highest new entry was Isabel, which climbed from 115th place last year to reach the 67th place. The names rising the most places were Amelia (up 64 places) and Alex (up 58 places).

The most popular boys' names by region were Sean (Dublin and Mid-East), Jack (Mid-West, South-East and South-West), Conor (Border, Midland) and Michael (West).

Emma was the most popular girls' name in every region except for the Border region, where Niamh was most popular.

Over 97% of birth notifications in 2004 included baby's first name when the statistical return was sent to the Central Statistics Office of Ireland.