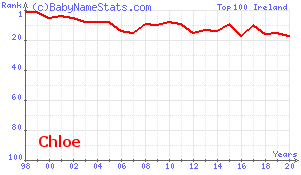 According to the data published by the Central Statistics Office of Ireland, the most popular names of babies registered in 1998 were Conor and Chloe. About 3.5% of baby boys were called Conor while 2.8% of baby girls were named Chloe. The other names in the top 5 for boys were Sean, Jack, James and Adam. For girls, the top five names were Chloe, Ciara, Sarah, Aoife and Emma.

Girls are given a wider variety of names than boys. The names in the top 100 accounted for 68.7% of girls' names compared with 79.6% of boys' names.

In four regions (Border, Midland, Mid-East and South East), Conor was the most popular boys' name. Conor shared first place with Jack in the South West. In Dublin and in the West, Sean was the top boys' name and Jack was first in the Mid-West.

Chloe was the most popular girls' name in four of the eight regions - Border, Dublin, Mid-West and South East. Ciara was first in the Midlands and joint first, along with Sarah, in the South West. Aoife was the top girls' name in the Mid-East and Rachel in the West.

The data is based on the analysis of the first names recorded on birth returns for registration and vital statistics, begun by the Central Statistics Office of Ireland in 1998. About 80% of birth notifications in 1998 included the baby's first name when the statistical return was sent to the CSO.