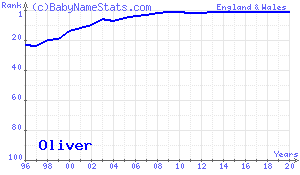 In 2009, Oliver (with 7364 births) and Olivia (with 5201 births) were the most popular first names given to babies born in England and Wales. Oliver climbed one place to the top, replacing Jack as the most popular name for boys. Olivia remained the number one baby girl name.

Maisie (+29 places) was the highest climber within the top 100 for baby girls. There were three new girl names in the top 100: Heidi, Sara and Mya.