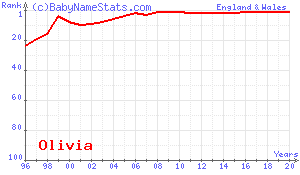 In 2008, Jack (with 8010 births) and Olivia (with 5325 births) were the most popular first names given to babies born in England and Wales. Jack remained at number one, while Olivia climbed to the top from the 3rd place.

There were no new entries in the top 10 for baby boys. Oliver and Harry each rose one place, while Thomas moved down to number 3 and Joshua to number 5. Alfie advanced four places.