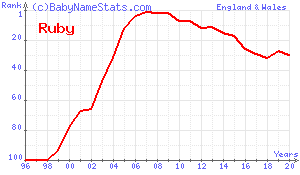 This year, Jack for boys and Ruby for girls are the most popular baby names in England and Wales. Jack has been the top boys' name for an amazing 13 years while Grace, who only joined the top 5 last year, is now the second most popular name for girls.

Olivia drops to number three. Emily has risen one place to fourth and Jessica has fallen two places to fifth. Evie has climbed 46 places in the last 5 years, making it the 15th most popular choice for baby girls in 2007.

The boys' top five looks almost the same as last year. Jack is the number one, Thomas remains at number two, Oliver rises one place to number three, Joshua drops one to number four and there is no change for Harry at number five. Jayden, which is now the 32nd most popular boys' name, has been climbing steadily since its appearance in the top 100 in 2004.