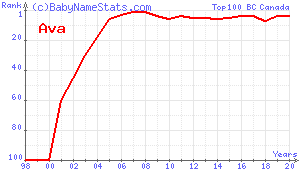 In 2007, Ethan and Ava were the leading baby names in British Columbia, Alberta, Manitoba and Saskatchewan. In Quebec, William (with 869 births) and Lea (with 465 births) were the most popular choices. Parents from Ontario preferred Ethan and Emma.

For the sixth straight year, Emma was the most popular name given to baby girls in Nova Scotia. Noah replaced Ryan as the top name for boys. Ryan remained in the top 20, but fell from the first spot in 2006 to the 15th. All but Emily were on Nova Scotia's top five list for 2006. Emily moved from the 6th spot last year to number 2 this year, while Hannah, which made the top five list in 2006, dropped to the seventh place.