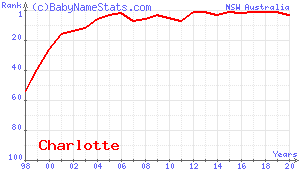 In New South Wales, Australia the most popular baby names in 2017 were Oliver (with 672 births) and Charlotte (with 577 births).